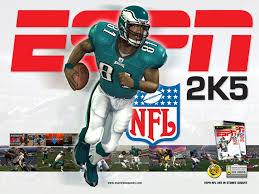 Well, this is probably Sega\'s last NFL football game for a while, considering EA just signed an exclusive deal with the NFL for the rights to all teams, stadiums, and players of the National Football League.

The graphics in ESPN NFL 2K5 are very good, and the animations are fantastic. You might mistake the runner to be real. I give the graphics a B+. 85%

The sound is pretty sweet, with customizable soundtracks for the XBOX. You can even choose what part of the song you want played. It also lets you control when it\'s played. (ex. after a touchdown, first down, etc.) It also adds an echo effect while blasting through the stadiums. The tackles and grunts from the players all sound believable. 85%

This is where the game really shines. I\'ve always hated the turbo effect in past football games. You press the button once and the player boosts forward for a brief instance. Then you\'re back running the same speed. The ESPN football games have perfected the turbo effect. Basically, the faster you tap the A (or X) button, the faster your player will run. It seems like something small, but there\'s nothing more satisfying then working the A button to outrun your opponent. At the snap, you can customize your receivers routes. Don\'t want Jerry Rice to run straight up? Then have him do a quick cut to the middle of the field. Very useful. There are also many \'juke\' moves for the runner to perform. Spinning, charging, and stiff arming, to name a few. If you\'ve seen the pros do it, you can probably do it in this game. You can break tackles the same way you use turbo. When a defender has his arms around you, you can rapidly press A to try to break the tackle. It\'s great when you break a friend\'s tackle and run into the end zone to score. I simply love this game\'s game play, the absolute best football game I\'ve ever played. 95%

If you\'ve watched an NFL game, you shouldn\'t find anything offensive here. I do have to mention that during half time, it shows a close up of the cheerleaders. During summer games they wear somewhat immodest outfits. I\'m pretty sure you can skip this.  95%