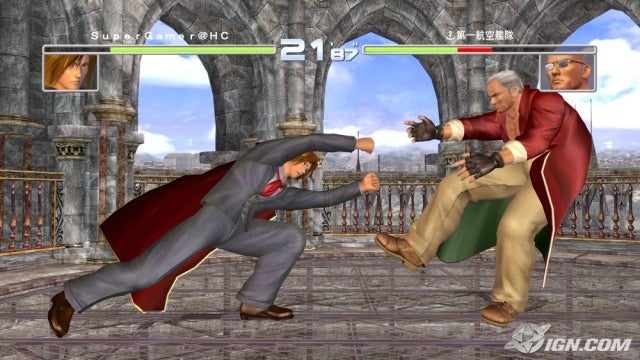 Dead or Alive Ultimate is a compilation of the first two DOA games. The game consists of two discs ? Dead or Alive 1 Ultimate, and Dead or Alive 2 Ultimate. On the first disc, you will find the original Sega Saturn version of DOA in all its glory, with new online modes. The beef of the game, however, is found in the second disc, which contains a fully revamped version of Dead or Alive 2, with improved gameplay, graphics, sound, and whole slew of other new stuff. Read on to find out more.

DOAU1 is basically the original DOA from the Sega Saturn, which never made it to the US, but was later ported to the Sony PlayStation. By today?s standards, the seven-year-old fighter is certainly lacking, but it was once a pretty impressive game. It?s interesting to go back and see which characters, moves, costumes, etc. have been carried over to newer titles in the series. There is a total of 8 playable characters, plus an extremely cheap boss. Don?t let him catch you ? One throw could easily take away more than half of your life bar. Countering is much easier in DOA 1 as well. All you need to do is press the X button to counter a high or mid attack. For low attacks, simply press Down+X. Though countering is simpler, I actually found this game to be quite harder than DOA2. Maybe that?s because I didn?t spend enough time with it. Environments are much smaller and simpler. Square arenas are surrounded by ground that explodes and blows your fighter into the air if knocked down on it. It?s a pretty fun game to play sometimes, and a great extra, but I think DOAU2 will probably keep you occupied most of the time. Each character has multiple costumes, though not as many as there are in DOAU2. A new addition to the game is, of course, the online play modes. More on that later.

This is most likely what your reason for buying the game will be - DOA2, remade from the ground up. Upon starting the game, you will have 12 characters with 2 costumes each. 3 more characters can be unlocked, as well as a stupendous amount of costumes and other goodies. The game has over 150 costumes in total, with some of the female characters having as many as 20 each. There are 22 stages, most of which are multi-tiered. Along with several new ones, many of the stages are returning from other DOA titles, with some major changes. There have also been some gameplay tweaks, many new features, (most notably the online ones) and huge visual improvements.

The story is pretty confusing, and has never been a very big part of the series. Each character has his/her own story, which is revealed in bits and pieces when playing through Story mode. For one reason or another, they?re all here fighting each other. A new opening movie for DOAU2 reveals more about Kasumi and Ayane?s pasts, and why the sisters grew up to be enemies. That is, in my opinion, the most interesting part of the story. I thought the scene was done very well. New ending scenes would have been nice too. When I think about it, the stories usually really aren?t very relevant in most fighters anyway. They?re mainly there to add some substance to the characters. I think DOAU does a decent job in doing this, especially in the opening movie. The story is not greatly implemented, but is pretty standard for a fighter.

This has to be the best-looking fighter I?ve seen. DOAU uses the Dead or Alive Xtreme Beach Volleyball engine to boast some great graphics. Character models are uber crisp and the scenery is beautiful. The attention to detail is great, from the sunrays shining into the camera to the snow forming around the fighters? feet. Environments are very expansive and diverse, with gorgeous backgrounds. The Safari stage actually has elephants and hippopotamuses that seem to act pretty realistically. I?m no wildlife expert, but it?s pretty cool to see how the animals react when left alone, or when they are bothered. The elephants, for instance, stand up on their hind legs and let out a moan when someone is knocked into them. There are lots of subtle details like this that have impressed me. Team Ninja really knows how to push the Xbox?s limits. I haven?t noticed a single glitch in the graphics. Everything is very smooth. There was one minor annoyance I found. That is, if you knock someone through a stainless glass ceiling, the glass shards fall to the floor before disappearing into thin air. It would have been a nice touch to leave the particles on the ground as free-moving objects. Again, this is a very minor detail, and some probably won?t even notice it.

DOAU actually supports 5.1 Dolby Digital surround sound. Surround sound in a fighter? Yes, it?s true. Voice acting and sound effects all sound good. I sometimes like knocking people in gongs in one of the stages just to hear its sound effect. English voiceovers are not an option, so you will have to listen to the original Japanese voices, except for the announcers. I personally like the voice acting. Each voice seems to fit its character and sync pretty well. Different announcer voices can be chosen, and a few of the character?s voices can be unlocked for this. Aside from the opening video with Aerosmith?s ?Dream On,? the game?s music isn?t anything spectacular. It keeps the original DOA2 music, which is pretty typical fighting game background music. Custom soundtracks would have been a nice feature, but when I think about it, fights don?t last long enough to hear very much of a song. Maybe this was the best way to go after all. Touching up the music a bit would have been nice, but I don?t think it?s all that big of a deal. It just sounds like old game music, which is what it is.

It took me over 15 hours to unlock all of the characters and costumes, and I had to force myself to put the controller down during that time. Most of that time was just spent beating story and time attack modes over and over again. Finishing collection mode should add another good chunk of time, and the multiplayer never gets old, especially if you have Xbox Live.

Here is where I cover most of the game?s faults. Unfortunately, sex appeal has always been one of the selling points for the Dead or Alive series, ever since the original introduced the infamous bouncing breasts. Skimpy outfitshave always been present as well. When people hear DOA, they often think of this. It?s pretty sad, really. Most of this can be avoided, and many of the costumes are not any worse than in any other fighter. Still, there has been a pretty heavy emphasis on this, and it is certainly not necessary. I?ll do my best to cover the offensive material in DOAU. Violence should go without being said, as this is a fighting game. It has no blood or gore, other than what I will cover below. Limbs can be broken with certain characters, but they are magically healed as soon as the character stands up. None of the violence is really intense. It?s more stylistic than anything else. Always keep in mind that experience will most likely change during online play. DOAU 1 The opening scene contains brief, slightly detailed female nudity from the waist up. This can be skipped, or watched whenever you boot up the game. The ?bouncing breast? physics pretty much defy gravity. Oddly, this can be disabled in the Options menu. Typical skimpy outfits are present as well. DOAU 2 The opening scene has implied rape, and partial nudity. The story deals with betrayal, murder, cruelty, etc., though it is hardly an important part of the game. This can be skipped, or viewed whenever you boot up the game. One level has nude clones inside tubes of green liquid. Legs and arms cover all frontal nudity, but rear nudity is visible. There are some pretty tacky costumes. I think the worst would have to be Tina?s thong bikini. You usually have a choice to use more modest ones, but these things are still in the game, and still inappropriate. A CG Gallery mode can be unlocked, which consists mostly of screens from DOAX. (This basically means pictures of all the female characters in swimsuits are here for your viewing.) Also, on the DOAU2 disc, there is an alternate opening scene that contains full frontal (though undetailed) nudity. Some mild language appears sometimes too. D--- and h--- are the only ones I?ve seen, with the exception of ?SOB,? which was abbreviated as it is here. One stage is called ?Demon?s Church,? and the boss is also supposedly a demon. Lastly, there is a scene of Helena?s mother being assassinated. All we see is some blood spray on Helena?s face. Like I said before, most of this can be skipped or avoided, but all of it is still there, and will most likely be a stumbling block for many people.

Dead or Alive Ultimate is my new favorite fighting game, and I?m sad to have to point out all of the negative parts. It?s not about depth, but rather fast and simple gameplay that still allows for strategy and skill. The online play and visuals are unmatched by any other game in the genre right now. If you are able to look past the sexual content, I think you will find that a great game lies beneath it.