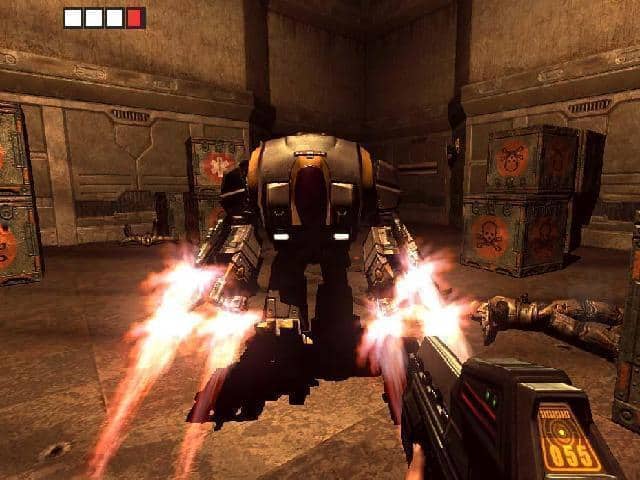 ESRB Ratiing:M My Rating: M (Parents, DO NOT, under any circumstances, buy this game for your kids)

The 2004 summer movie hit is the basis of a video game, is it a typical movie game bust, or did Starbreeze make a good movie-based game, a rare feat indeed.

This game is gorgeous, just plain amazing as far as graphics. Possibly the best looking game on the X-Box until Halo 2 comes out. This game relies heavily on 2-D textures, but with the use of normal-mapping all these textures appear to cast proper shadows and have depth, to see this game in action is a gamers dream. I have to give this an A+ for graphics.

The sound in this game is nearly as amazing as the graphics. The subtle effects of the sound truly immerses the gamer into this decidedly disturbing world. The weapons sound perfect, and the voice work is amazing. Anyone who plays this will not be disappointed by the sound in this game, another A+.

This game does not have the same story as either movie (Chronicles of Riddick and Pitch Black), it actually takes place before both. You are Riddick, one really bad guy, and as the title says, you are supposed to escape from Butcher Bay, the most secure prison in the galaxy. Although not as complex or in depth as many RPG stories, TCoR has an above average story for a shooter-action game. It deserves a solid B in this category.

The game play is smooth as can be. There aren\'t any problems here at all. The control is amazingly tight, and just about perfect. There isn\'t a console shooter with controls this good except Halo. Rarely, if ever, will you feel that you are fighting the controls rather than the game. This deserves at least an A.

As great as all the above is, this game does fall short, literally. This game just isn\'t long enough, I beat it the first time after only 10-11 hours (note: this isn\'t 10-11 hours of game time, this is literally sitting down at 5 pm and finishing at 3:30 am). But, the immersive quality of the game is astounding, this game just draws you in, but this just emphasizes the short length of this game, because it goes by so fast. There is also no multi-player, after finishing the single player game you just want to see what this would be like against someone else, but it would be hard to translate many of the fundamental gameplay aspects into multi-player. The replay-ability is decent, you will want to play it at least twice so you can get all the unlockables, but past 3 times and the game would get rather boring. A C- is the best I can give this game in this area.

To say this game goes against anything good and holy in the world is pretty close to right on. Extreme violence and gore is all over this game, this is most definitely not a kids game. There is one scene where a dead corpse is nailed to a wall with his hands outstretched and his head removed with writing on the wall in blood (while I don\'t think the developers of this game meant this as a knock against Christianity and Christ\'s crucifixion, this is a pretty standard showing of gore for this game) There is also language, a lot of language, curse words run rampant through this game (you are in a prison it\'s actually about how I would expect it to be). There is even a little bit of gambling, at one point, you can play a bit of craps to gain a bit of money. Throughout the game you collect packs of cigarettes to unlock special features. There is, however, very little sexuality, and because of that, this game only gets a D for appropriateness.

As a game, TCoR is nearly perfect, albeit far to short. But from a Christian perspective, this game could be greatly offensive to you. If you can put up with the violence, etc. then I totally recommend playing this game but just rent it (You can beat it 2 or 3 times in one rental period). But, if you are a parent, in no way should you even think about giving this to a minor, PERIOD. This game draws you in and never stops to let you catch your breath. I have to give this game an overall grade of a B, or 86 %.

Graphics: A+ Sound: A+ Story: B Game Play: A Intangibles: C- Appropriateness: D