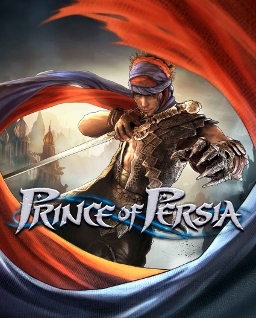 As I ran along the wall, my eyes feasting on the picturesque landscape, I jumped to the nearby ledge, only barely making it because a mysterious, magical woman lent a hand. Prince of Persia is the beautiful tale of a thief caught in a set of unfortunate circumstances. That’s right, I said thief. This “prince” is only a prince in an ironic sense, and although this game has nothing to do with the rest of the series, I couldn’t care less. This title can proudly stand on its own, even if the only thing that ties it to the Prince of Persia series is the action-adventure genre.

The game revolves around the prince and Elika, princess of a people called the Ahura, traveling throughout her kingdom, returning life to the land. You see, the entire game world has been corrupted by an evil, black substance called (this is actually its name) corruption. To rid the world of this corruption, you must reach the fertile grounds (large, magical plates) so that Elika can use her magic to heal the land.

The first time you reach a fertile ground, a boss fight will trigger. The boss you fight depends on the area you’re currently in, and each time you fight them, their tactics will change slightly. This definitely helped keep things fresh, considering you fight all four of the bosses six times.

After the boss has been defeated, Elika with heal the land, and as she does, light seeds will appear. These light seeds are luminescent orbs scattered throughout each level that Elika uses to unlock more of the world. I personally enjoyed this part the most. Traveling through the level for the first time, collecting light seeds, was always interesting. I never knew what I would see, climb, or do next; it was fantastic. 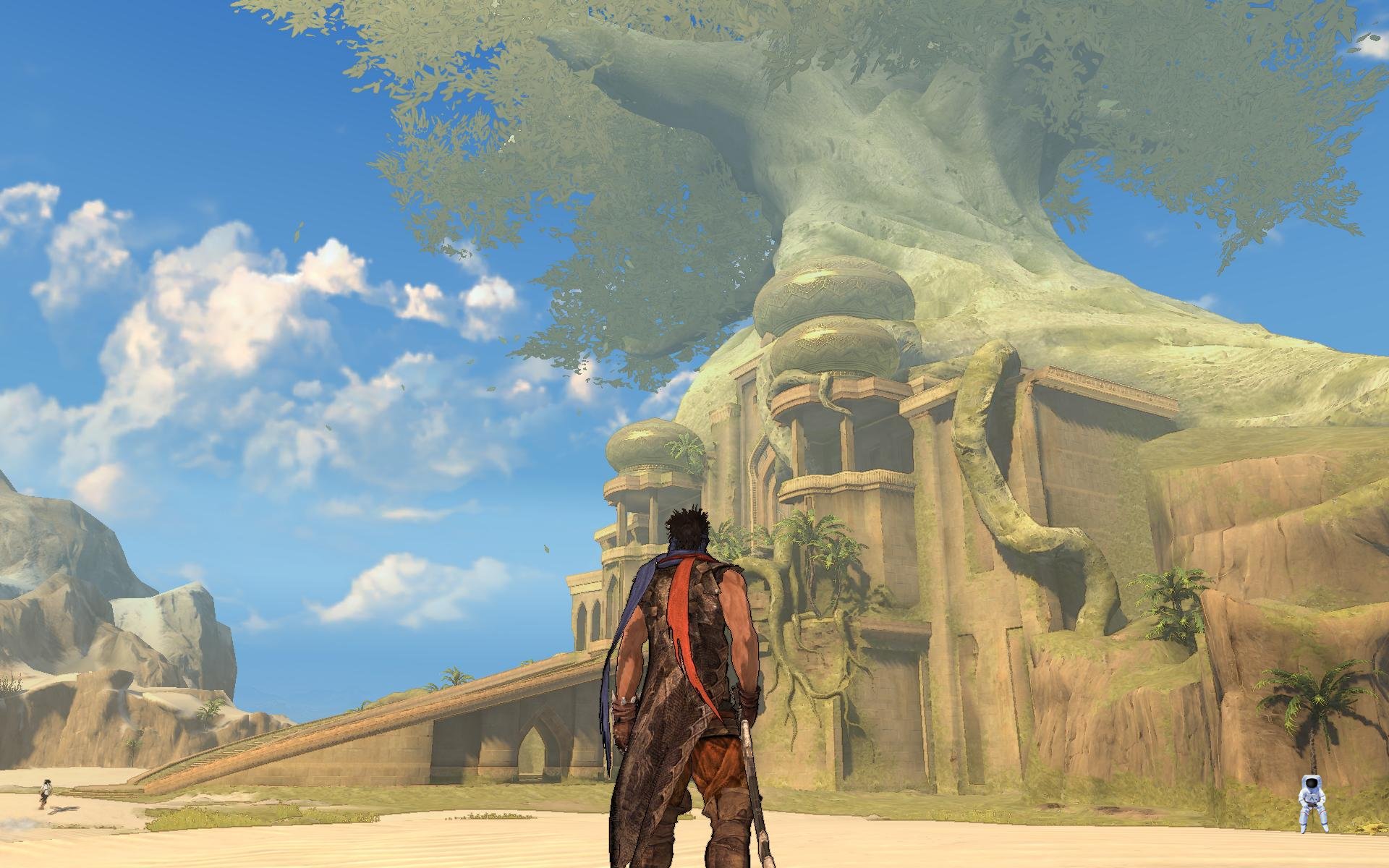 Platforming is based around four abilities: jumping, wall running, climbing, and the gauntlet. It was fluid and pretty, but not terribly involving. At times, it felt more like a series of quick time events, rather than a platformer. This doesn’t ruin the game, but considering the game is comprised mostly of platforming, it certainly is a major problem.

I also found the platforming too easy, partly because the developers decided that you shouldn’t have to die. That’s correct; you cannot die in this game, ever. When you miss a jump or take too much damage in a fight, Elika will simply reach out, grasp your hand, and fly you back up to the nearest ledge. This certainly is a strange choice for a Prince of Persia game, a series that has had a rather high difficultly level in the past. However, on the positive side, it does make the game more accessible, but I don’t think most gamers will care too much about this point.

I’m not entirely sure why, but this difficulty problem really irritated me, probably more than it should. It bothered me that there were no consequences for my failure; I felt like I hadn’t accomplished anything. Whenever I messed up, it felt like the game was just standing over me, tapping its foot, impatiently waiting for me to do it right.

What’s worse is that combat feels the exact same way: beautiful and simple, yet shallow. The four face buttons all result in different attacks, which can be mixed and matched into complex and impressive combos. The abilities to block, parry, and counter-attack are also available. Enemies can use these abilities as well, though, and the game makes you lean heavily on the parry and counter-attack abilities to win a fight. Combat is far too formulaic: wait for enemy to strike, parry, counter-attack, and repeat. It looks fantastic, but it’s just not awfully involving. 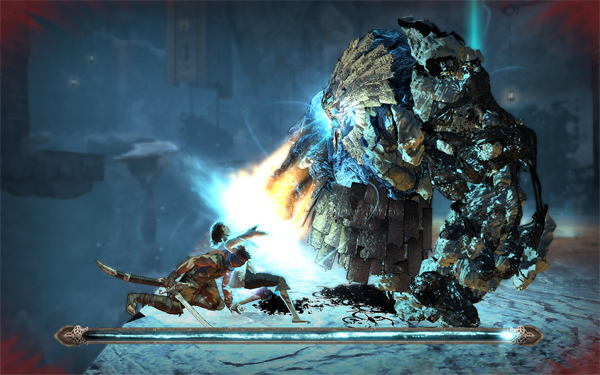 I think I’ve harped enough on this game: it’s time for the good stuff, the graphics. You may be sick of me saying this, but the only way I can describe this game is beautiful. It was always exciting to go into a corrupted area, blackened from pure evil, and watch color and life return as Elika heals the land. It’s not just the landscape either; the animations are some of the most fluid I’ve ever seen. Whether it was running along a wall, climbing a ledge, or combating an enemy, the prince and Elika looked fantastic doing it. The enemies also all had a certain swagger to them; I could immediately tell what they were like, simply by how they moved. I can definitely tell somebody spent a ridiculous amount of time making sure everything in this game looked amazing. From the way fabric waves in the breeze, to the small details on every rock, character, and structure, this game is a living piece of art.

Although the game doesn’t seem to have much of a story in the traditional sense, the bond between the two main characters more than fills in for one. I was constantly talking to Elika, learning more about the places we went, about her, and the mess we’d gotten into. I loved watching their relationship grow throughout the game and I honestly believed in the bond they had. They weren’t merely characters from a video game; they were living, breathing people. They joked, flirted, worried, and dreamed. I was so hooked, that I was nearly in tears by the end.

I can’t imagine the pressure put on the sound composer after seeing the quality of this game. Finding voices that matched the characters’ personalities must have taken months, and I can’t even think about how long the music must have taken. Voices are all top notch and fit their respective characters perfectly. You may even recognize the voice of the prince as well-known voice actor Nolan North, also in the Uncharted series, Batman Arkham City, and even Ubisoft’s own Assassin’s Creed series. (Which I find hilarious since there just happens to be an in-game skin from Assassin’s Creed.) The princess also has a popular voice actor in the form of Kari Wahlgren, and though you may not know the name, I guarantee she is in at least five things you know. (Just check Wikipedia ATTACH http://en.wikipedia.org/wiki/Kari_Wahlgren) Even the enemies all have well thought out voice actors that play their roles fantastically. They were intimidating, chilling, and deceitful; exactly what I would expect from beings of pure evil. 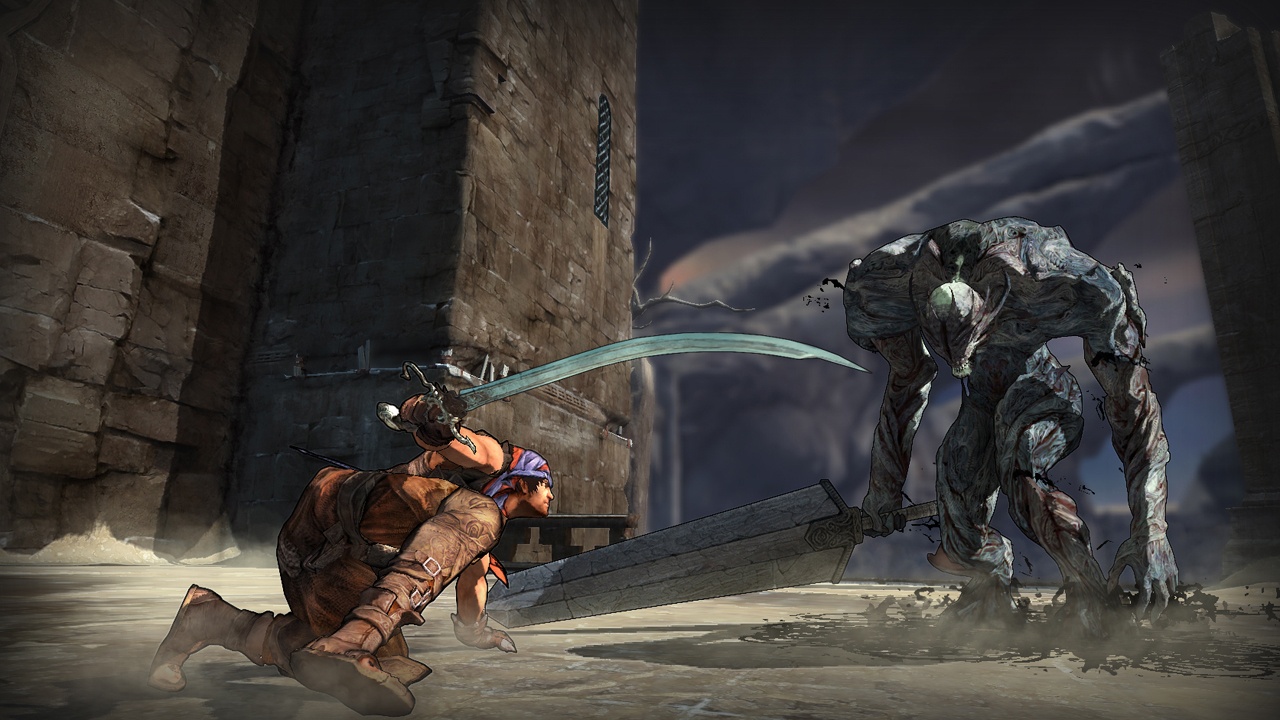 It’s just unfortunate the music isn’t as well-utilized. Because although I actually enjoyed what I heard, I hardly ever heard it. The music was always too quiet and unnoticeable. It bothers me that someone took the time to compose this beautiful music, and it’s horribly underused. I can’t complain much though, since, more often than not, I was busy listening to the game’s witty dialogue.

Another thing I can’t complain about, are the controls; they were perfectly simple. A to jump, B is for the gauntlet, Y for magic, and X for the sword. It was a brilliant how they simplified both platforming and combat into the same four buttons, it makes it incredibly easy for newcomers to jump straight in. I also appreciate how the left trigger is used to chat with Elika, a feature I used more than I care to admit. Not because it would help me out, but because she and the prince always had something interesting or funny to say. It’s interesting that something related to the controls could have such an impact on the story and overall atmosphere of the game.

The morality content was right about where I expected for a T-rated game. Violence is the most prominent problem, but most of it was against non-human beings. The game’s religion is based on the real religion of Zoroastrianism, though I never felt it was shoved down my throat. It was good verses evil, perfectly acceptable. The only other major problem is Elika’s magic, but as far as I can tell, it isn’t based on any occult magic. A few sexual jokes were used and Elika’s clothing is slightly revealing. I heard #ss a few times, and the prince referenced alcohol. On a side note, I found the corrupted somewhat scary looking; it’s not listed, and I doubt anyone over thirteen would be bothered by it, but it’s best to know first.

I feel I may have used the word beautiful too many times in describing this game. The problem with that, is that it’s exactly what this game is, beautiful. Beautiful graphics, beautiful story, beautiful controls, and beautiful simplicity. This title may not exactly excel as a game, but it shines as an experience. It was a magical trip through a magical world ravaged by evil. The question now, is whether or not you think this experience is worth having, and as long as you aren’t bothered by the game’s slightly questionable morals, I think it is.