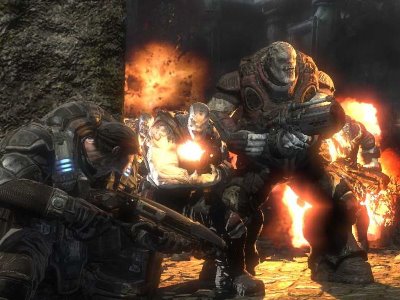 Gears of War was announced at the Electronic Entertainment Expo (also called E3) in 2004. It received lots of attention due to its amazing graphics. Many said that it had the best graphics they have ever seen. The company making Gears is Epic Games. They are mostly known for the fast paced online PC shooter series, Unreal. They had already created the Unreal Engine 3, which is widely considered the most powerful graphics engine out right now. What shocked a lot of people was the tactical pace of Gears of War. Epic had always made intense frenetic shooters, like the Unreal series. Many questioned whether Epic could shift gears (no pun intended) and create a completely different experience. After 2 years of hype from the media, gamers and Epic themselves, Gears of War is finally available. Shockingly it has lived up to all the hype. I don’t think I’ve ever seen any game get so much hype before, including Halo 2. Fortunately Gears of War lived up to all the hype maybe even surpassed it. It’s an amazing experience that every gamer that owns an Xbox 360 should get. Now lets discuss the game itself.

The first thing you will notice about Gears is the third person camera angle. Unlike most shooters these days, Gears does not play in first person view. This fits the game very well, especially with all of the action going on around you. It’s very intense and you always need to keep an eye out for enemies flanking you or popping up out of the ground through Emergence Holes, as the game calls them. You never know when an enemy will attack; there are never any calm moments in the game, even during the cut scenes there is some kind of action going on. Another difference between this and most other shooters are the controls. The standard view is behind the back of your character but holding down the left trigger switches the camera to an over the shoulder view and adds cross hairs to the screen. This is better for new players who haven’t mastered the blind fire technique that will you need to use a lot later in the game. The thing that makes Gears unique is the enjoyable and easy to use cover system. Simply pressing A near any object will allow your character to hide behind anything. While hiding you can stick your head around the corner to see what’s coming or pressing the right trigger allows you to shoot over the object without presenting your body for damage.

If a squad mate dies during battle you can run over to him and press X to revive him. If you are playing single player you will have to do this a lot because the computer characters die a lot. There is something called Active Reload that allows you to reload faster and temporarily make your bullets stronger. You press the right bumper to reload and a moving white line will appear, pressing the right bumper again while the line move into a small grey area will make you reload faster and boost the power of bullets. If you don’t time it right, your gun will get jammed and you will be open to fire. While it may sound like a complicated way to reload, it’s really quite simple. Gears does a lot of things different from most of the other games in the genre, so it won’t feel like just another shooter. The single player mode is the weakest aspect of the game. It’s made up bye 5 Acts that contain about 4 or 5 levels each. It only takes about 10 hours to beat it on normal but playing on hardcore or insane will take even the most experienced gamer much longer to beat. The length of the single player mode is one of the problems but the nonexistent story hurts it the most.

At the beginning of the game your character(named Marcus Fenix) gets busted out of prison by an old friend. You learn that Marcus was put in prison for disobeying orders during a battle and nothing else is really said. After that the story just kind of dies, I was disappointed with it. I’m a big time RPG gamer so the story is something I always enjoy but sadly Gears doesn’t have one. The thing that Gears calls its story is quite simple. An angry group of aliens called the Locust Horde attack the humans by appearing through Emergence Holes. Hopefully the sequel will have a much better story. Gears leaves you with a lot of questions so I assume Epic will spend a lot more time on it for the sequel. I think the main reasons this game was made, are for co-op and online. Because you can tell Epic didn’t try to hard on the story. The co-op mode is very fun though. Perhaps the best co-op mode in any video game made. It’s not much different than the single player mode but having a friend covering you while you run in and attack is a lot more fun than doing the same thing with the computer. So if you have this game and you have a friend, play it on co-op as soon as you can. It’s one of the most enjoyable experiences I’ve ever had while playing a video game.

The best thing about Gears is the awesome weapon selection. It includes all of the standard weapons, such as the shotgun, snipe, pistol, and grenades. Two of the unique guns in this game are the chainsaw gun and the Hammer of Dawn. The chainsaw gun is probably the coolest weapon I’ve ever seen. It even surpasses the gun blades from the Final Fantasy series. It’s a normal machine gun but on the bottom there is a chainsaw that you can use to defeat your foes. To use the chainsaw all you have to do is hold down B and press the right trigger. You enemies will be at your mercy with this weapon. The Hammer of Dawn is very different from any other weapon I’ve seen. When you have the gun hold down the trigger and aim at an opponent. After a few seconds a laser will shoot down from a satellite and blast your enemy away. It’s very fun but it takes some practice before you will use it with ease. All of the controls take a little bit of time to get used to but after a few games, you will have no problem.

The multiplayer is a great experience. There are three different game types all of which are very similar but there is just enough of a difference that they all feel unique. The first of these is called Warzone. It’s the same thing as team deathmatch from every other shooter, but with the fun game play of Gears it will never get old. The second game type is called Execution. It’s the same thing as Warzone but you must kill your enemies by sniping them or beating them down. It’s similar to the way you earn medals in Halo 2. The third and final game type is called Assassination. In this mode each team has a leader and they must protect their leader while hunting down the opposing team’s leader. I had the most fun with this mode. The multi player never gets old and will keep every gamer satisfied for a long time.

The graphics can’t be described in words. You have to see it for yourself. Saying that the graphics are stunning doesn’t do it justice. Playing this truly makes me wonder if Sony’s Playstation 3 is really more powerful than the Microsoft’s Xbox 360. I don’t see how it’s possible to make graphics any better than this. You can see the dirt on the characters body, the hair on their face, and the veins on their arms. I was blown away. The sound is good for a shooting game. It’s definitely not Legend of Zelda caliber, but it is still very good. The music adds to the game a lot. While the game itself is not scary the music creeps you out. Kind of how Halo did it in the 343 Guilty Spark level, the level itself wasn’t creepy but the music was. Gears does the same thing only better. The sounds of the gun were very impressive. Each gun had a unique sound. Epic did a good job in the sound department. Thankfully there were no bugs or glitches in the game; usually shooters like this have a few problems that are fixed by a downloadable patch. Fortunately this game did not have any.

As is the case with every shooting game there is a fair amount of violence. Thankfully in this game you’re limited to killing aliens. There is also some blood but it’s not realistic, seeing as you are killing aliens. Unfortunately unlike Epic’s other series Unreal, there is no option to disable the blood altogether. While it’s not a major problem anyone who might get grossed out by any blood at all, even if it’s fake alien blood will not want to play this or any other shooting game for that matter. There\'s a lot of bad language present. The “D” word and “H” word are used twice each during the single player campaign. The back of the case says “Strong Language” but the ESRB apparently forgot about the other category “Mild Language”. This game should have been in the latter category and due to the wrong information on the back of the case it may prevent people from buying this and hurting sales of a great game. In my opinion no Christian gamer should play this online or any other game for that matter. It seems everyone you play against has something negative to say about everything you do. In my brief online experience I was cussed out every match. This ruined the experience for me. I wish there was some way to prevent the horrible language but I doubt Microsoft or Epic could do anything about it.

After playing through the game twice and playing every multi player mode, this is the obvious choice for the best Xbox 360 game available. Unlike most other games, it managed to live up to the hype. I was very satisfied with my $60 purchase, normally I’m one of those people who wait a while before buying something new but after seeing a trailer for it on Xbox Live I couldn’t help but going out and buying this the day it came out. I just hope that Epic works harder on the story for the sequel. If the story was better and you could prevent the disturbing language you hear online then this game would be perfect. I recommend this to anybody over the age of 13 however keep in mind that it’s rated M. I hope this review is helpful to anyone considering a purchase of this game.