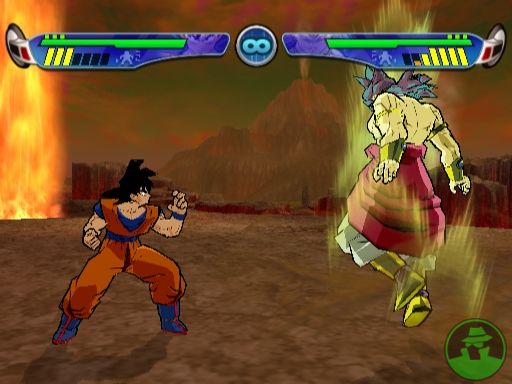 Wow. Is there any other introductory word I could possibly use for a game like this? DBZ: BT3 for the Wii is not an utterly new or fresh game, but it is solid to the core.

The fighting system (usually the most important thing in a fighting game) is by no means deep like Virtua Fighter or Street Fighter, but its subtle nuances give you reason to do more than mash the A and B buttons. The fighting is very fast paced, and problems I had with the over-simplistic, and IR dependent, Wiimote/Nunchuck controls from BT2 are no longer present. Flight is more easily controlled, combos are much more diverse, and special attacks rely solely on motion sensing. There are a ton of characters (I think somewhere close to 200 when including all of the variations; a variation being the difference between Gohan, Super Saiyan Gohan, Super Saiyan Gohan 2, and so forth). There is also a simple, but functional, customization system. This gives players room to turn characters into hand-to-hand specialists, defensive specialists, or energy blast specialists.

The graphics have not improved significantly since BT2, but they look more polished. Special attacks are devastatingly brutal in presentation. Character models look very much like their anime counterparts, and are animated likewise. On the whole, the graphics are very pleasant. Very little graphical slowdown takes place during offline gameplay in spite of how intense the gameplay is. For those of us with high definition displays, 16:9 widescreen is still not present, but 480p progressive scan is. With the majority of Wii games supporting widescreen gameplay, this is a disappointment, but progressive scan is an appreciated improvement over last year\'s game.

The audio is good. There is a ton of voiceover work, particularly in the more cinematic (though reduced) story mode of the game. The music is... well... it\'s Dragon Ball Z. I can\'t say that I would listen to the music outside of the game, but it fits the game well.

In short, the game is a great deal of fun. It\'s addicting and entertaining in spite of its deceptively shallow exterior. What\'s more? There\'s online play in the Wii version of the game. The online play is laggy to the point of being nearly unplayable at the time of writing, but there is a chance that Atari will improve this. For the latest information, visit: http://fixbudokai.blogspot.com

For the record, I wasn\'t a fan of DBZ prior to playing BT2. Even then I hadn\'t become a fan of the series, but I am finding myself watching it now. This is meant to be a testament to the game\'s appeal beyond its established fanbase. Of course, there is something to be said for "throwing a kamehameha" (energy beam attack, literally "turtle blast wave") with the Wiimote and Numchuck (I think I\'ll have to get a wireless Numchuck because of this game). The special move actions have been refined and improved. Even for this 21 year old college student, though I feel like an idiot when playing this game as such (you can\'t help but stand up and reenact the special attacks), it\'s thoroughly enjoyable.

The moral content is this game is fairly straightforward. The violence is very much over the top, but it\'s rare for death to occur (more of a knock-out). However, some deaths occur in the story line, along with revivals. These things are handled in a very fairy-tale like fashion, however, and shouldn\'t be a point of concern for most individuals. Beyond that, the supernatural is limited to an ambiguous energy used for special attacks and a character resembling a stereotypical devil. Othan than some skimpy outfits , there is nothing to speak of in regards to sexual content. On the positive side of things, family is important to many of the characters and determined self-sacrifice is very central to character actions.

I highly recommend this game to anyone who might find appeal in it. Don\'t worry about knowing (or caring about) the license because the game is too fun to restrict to being a license cash-in. It\'s definitely worth a rental, but with the cost of rentals these days (and the amount of things to unlock and enjoy), your money would probably be better spent on buying the game outright. If online play is fixed, this game will be an amazing way to bide your time until Smash Brothers, and will be a great compliment to Brawl when it comes out.

Bonus
This game promotes the importance of family values. (+3 pts)