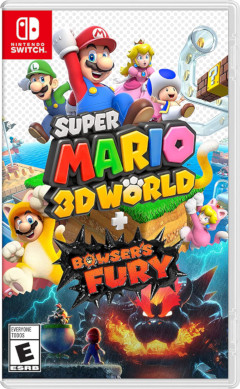 Super Mario 3D World was a delightful platformer released on the Wii U back in 2013. While many overlooked it because of its simplicity and the system it was on, I really enjoyed its creativity and chaotic multiplayer. For Mario’s 35th anniversary, Nintendo released an enhanced port of 3D World and a new game, called Bowser’s Fury, which is packaged with it. This package is not so cleverly named Super Mario 3D World + Bowser’s Fury.

Super Mario 3D World is as simple as Mario games get. Bowser has captured a group of fairies called the Sprixie Princesses, who need to be rescued from his clutches.

3D World plays like a 2D Mario game, but in a 3D environment. The player runs and jumps through linear courses to reach a flagpole, while avoiding enemies and collecting coins along the way. The player can find classic power-ups, such as the Fire Flower and Super Leaf, along with the Cat Suit, which allows the player to climb walls. Much like the western Super Mario Brothers 2, the player can play as Mario, Luigi, Peach, and Toad, with each character having a unique trait, such as higher jumps or quicker speed.

A platformer can’t be good if the level design isn’t well-made, and I can safely say that Super Mario 3D World’s courses are some of the most creative levels I’ve seen in a platformer. Each course focuses on one or two gimmicks, such as platforms that move under the player’s weight, or clear pipes that allow the player to pick his destination. These gimmicks are always used in new and clever ways. In the Wii U version, there were a handful of courses with annoying caveats, such as forcing the player to use the Wii U GamePad and only allowing for one player. Thankfully, these limitations were removed in this version. 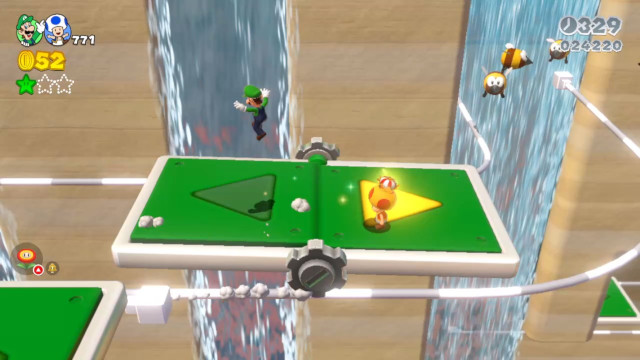 Hidden in courses are four collectibles, three Green Stars and one Stamp. Green Stars are used to unlock extra courses, and Stamps can be included in screenshots when using the new Snapshot Mode. These collectibles greatly expand the replay value, which is good, as the game otherwise isn’t super long. Despite characters having different traits, courses are designed so that they can almost always obtain any collectible, which is appreciated.

3D World is great when played alone, but it truly shines in multiplayer, which works much better here than in the 2D games. Up to four players can play together, each using a different character. While players are expected to help each other out, they are free to troll each other if they desire. This trolling causes multiplayer to be very chaotic, but anyone who’s played a cooperative Mario game in the past knows that being able to troll friends is why the multiplayer is so fun. This Switch release even allows friends to play together online, though the lag can be very poor at times.

Running and jumping through courses feels as fluid as ever. Simple button combinations perform satisfying abilities, such as the iconic Long Jump and a new mid-air roll inspired by Super Mario Odyssey. The only problem with the controls is that since running and grabbing are mapped to the same button, it’s very easy to accidentally pick up players and throw them into hazards. A strange, yet appreciated change is that the player’s speed is much, much faster than in the Wii U version.

Super Mario 3D World is a bright and colorful game, as it should be. The visuals haven’t been greatly adjusted from the original release, but they still look good. The Switch release adds the Snapshot Mode feature from Super Mario Odyssey, which allows the player to move the camera and add filters and Stamps to create cool screenshots. There isn’t too much to say about the soundtrack, but the jazzy music is really nice for a Mario game.

The story of Bowser’s Fury is about as simple as 3D World’s. Mario must work together with Bowser Jr. to collect Cat Shines in order to cure Bowser, who has been uncontrollably terrorizing an area called Lake Lapcat after being covered in black goop.

Whereas Super Mario 3D World is about linear platforming, Bowser’s Fury is about open-world exploration, much like Super Mario Odyssey. The player is tasked with exploring Lake Lapcat in search of Cat Shines, which can be found on islands spread throughout the lake.

I’ve always wanted a Mario game with one connected world, and Lake Lapcat is exactly that. The islands are separated by a massive lake that can be traversed by riding Plessie, a minor character from 3D World. Aside from the occasional bonus area, the world is completely seamless. 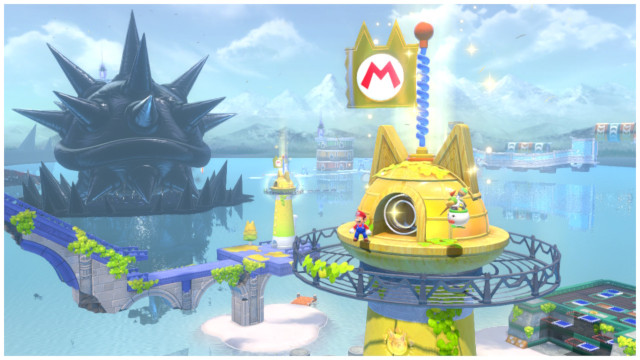 As time passes, Bowser’s shell slowly rises in the center of the map. Eventually, Bowser will come out of his shell and start attacking the player, forcing him to dodge falling fireballs and take cover from beams of fire while still looking for Cat Shines. After some time, Bowser will retreat into his shell, giving the player a few minutes to breathe. I really enjoy the difficulty of trying to stay alive during these events, but Bowser appears way too frequently at times.

Bowser’s Fury is a short game, only taking around four hours to beat, and another four to 100 percent. This may be fine for some, but those who expected a game even a fraction as long as Super Mario Odyssey will be greatly disappointed.

As to be expected of Mario games, there are very few moral concerns. Of course, there is silly cartoon violence, such as jumping on and throwing fire at enemies. There are infrequent skeleton enemies, along with wizard enemies that use fairy-tale magic. Some courses are themed around haunted mansions and have ghost enemies in them.