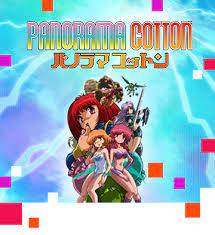 Thank you ININ Games for sending us a review code!

Panorama Cotton was originally released in 1994 for the Sega Genesis/Mega Drive systems. This game was unique to the system with its 2.5D third-person perspective take on the Shoot ‘Em Up genre. You play the game viewing the backside of Cotton flying on her broom. Her fairy friend Silk is back too.

This is the third Cotton game I’ve played as I recently reviewed Cotton 100% and Cotton Rebooted. Panorama Cotton has some similarities with Cotton 100% with save states, cheat codes (that only unlock after beating the game), and no localization. Unless you can read Japanese, you’ll have no idea what the backstory of this game is.

Thankfully, the Nintendo eShop shares the premise of this entry in the series. Cotton the witch is still obsessed with Willow candies and is upset that there is someone out there burning them. The source could be the Queen Velvet who has been acting strange lately. Cotton has no interest in saving the world again but wants to stop whoever is burning her beloved candies.

Panorama Cotton is broken down into five stages with each one of them ending in a boss battle. Completing the game can be done in a couple of hours or less if you’re good. Cotton has an unlimited amount of ammo but her magical attacks are limited. I highly recommend saving the magical attacks for the boss battles.

Cotton begins the game with six health bars with a possible maximum of twelve. As Cotton shoots down enemies, she’ll earn points and for every 50,000 points earned, a life bar will be replenished. If all of the hit points are depleted you can continue as long as you have one of the five credits available. After all of the credits are spent, the game will be over and you can put your initials on the score board if you have enough points to be there.

There’s a decent variety of enemies and new ones are introduced in each stage. Many of them can be taken down with the default attack while others can only be avoided. Some enemies hurl projectiles so Cotton will have to dodge those as well. The bosses are big and intimidating, but like many before them, they have a vulnerability to exploit.

While Panorama Cotton is relatively family-friendly, it’s worth noting that there’s cartoon violence, magic use, and some female characters showing more skin than clothing.

As of this review, Panorama Cotton is 40% off and $8.99 instead of the normal asking price of $14.99. Since this game is relatively short, picking it up on sale is recommended. My biggest complaint is the lack of translation. If you don’t mind not being able to read the dialogue, there’s some solid gameplay here from a unique perspective.