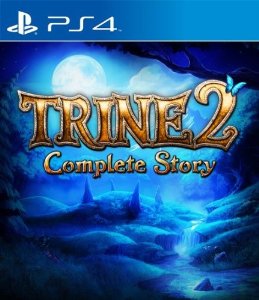 Thank you FrozenByte for sending us this game to review!

The Trine is a magical artifact that bound the souls of the wizard Amadeus, the knight Pontius, and the thief Zoya, together in their last adventure together.  A few years after the event of Trine, Amadeus is woken up by a bright light.  He decides to investigate, and finds the Trine summoning him for adventure once again.  He is quickly joined by Pontius and Zoya once again, as the forest is coming to life, goblins are attacking, and the world needs your help to save everyone from impending peril.

For those who have not played Trine, I would encourage you to read our review of that game, here.  As in Trine, each character has a unique set of abilities.  They all contribute to solving puzzles, finding secrets, and eliminating enemies, each in their own way.  You can switch between each of them at any moment, with the trigger buttons.  This is all done on a 2D side scrolling play-field, filled with puzzles, enemies, and items galore.  To find everything, you'll need all of the characters.  For those who like to do things the hard way, there is an achievement to play through a single level without changing characters.  It must be quite a challenge; it may be fun to attempt sometime.

Environmental hazards are much more common and difficult in this game than the previous entry.  There is everything from hot air to poisonous vapor to burning acid and hot lava.  Not to mention everyone's favorite: deadly spikes.  On top of all of this, there are some really challenging puzzles which can test your brain and acrobatic skills.  I am very impressed with the quantity and quality of the puzzles.  The first game had some great ones; this one has some doozies.  Although I didn't need it, the characters can now offer hints after a certain amount of time.  That time delay is actually configurable in the options. 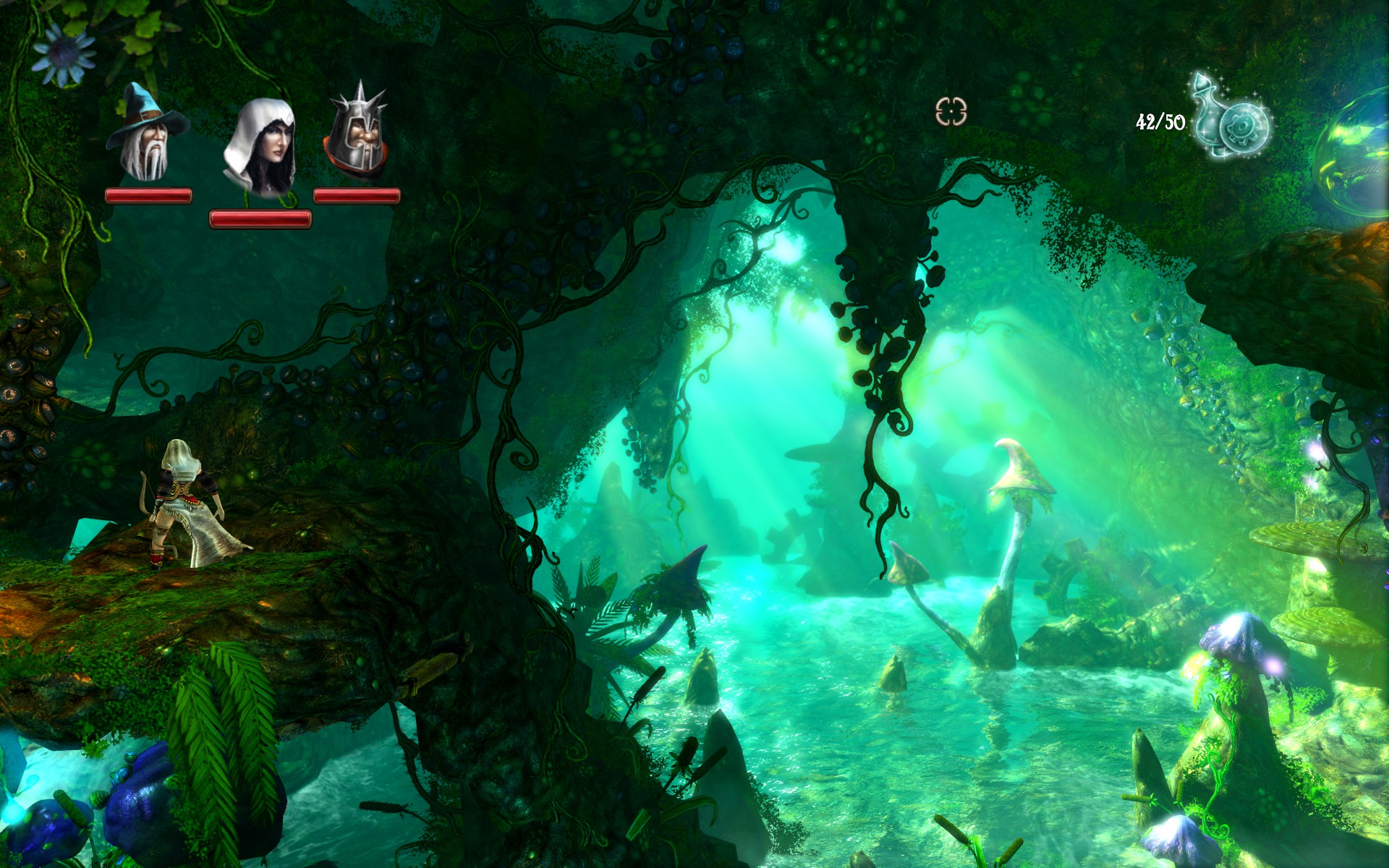 Strong Points: Breathtaking graphics; beautiful music; wonderful voice acting; silky smooth animation; creative and challenging puzzles; great level design; lovable characters that are each fun to play; multiplayer co-op; excellent use of the PS4 controller
Weak Points: The wizard is hard to play when using the Vita via remote play
Moral Warnings: Fantasy violence; magic is used by the player and the enemy, though mostly in the form of levitation and object creation; plot involves jealousy and betrayal of close family members

Those characters come to life here as well.  While I can't say that the story is as engaging as Trine was, because the main characters are well established already, the voice acting, narration, and storytelling are all done very well.  On each loading screen in between levels, the narrator explains what is happening, and where they are going now.  The characters themselves also say how they feel, in a distinct and lovable way.

All of this is done with voice acting that is simply top notch.  All of the actors from Trine reprise their role here, and do an excellent job.  It's fun to listen to their banter, especially since there seems to be more of it as well.  Since they know each other better, it's fun to listen to some of the exchanges as they sometimes get personal.

The music and sound effects are similarly great.  I wouldn't say they are noticeably better than the first game, though there is a bit more enemy variety.  Instead of dozens or even hundreds of skeletons to slay, there are goblins of many types.  There are also many other new enemies, including crocodile-like creatures.  They also removed some of the more annoying flying creatures that the first game had a few too many of, which I definitely didn't miss.

One area where this game really shines is in the incredible graphics.  Trine 2 is the only PS4 launch title to support stereo 3D.  With all of the details maxed out in 1080p at 60 frames per second, it is simply breathtaking. While Trine looked great, this really takes it to the next level.   There are colors everywhere.  The lights glitter, rainbows glow, and the forest seethes with color.  It's simply amazing.  And the environments are varied and equally gorgeous.  From the town to the forest to the underground lairs, all is wonderful to look at.

The controls are a perfect fit for the revamped PS4 controller.  The triggers switch characters and the analog knobs lift the Pontious' shield or shoots Zoya's arrows.  The touch pad + trigger combination is perfect for summoning boxes and moving objects as Amadeus.   Playing the wizard on the Vita via remote play is a bit more complicated since it's missing the second set of triggers and the option button which this game relies heavily on.  I was happy to find that you can use the Vita as a primary controller via Remote Play. 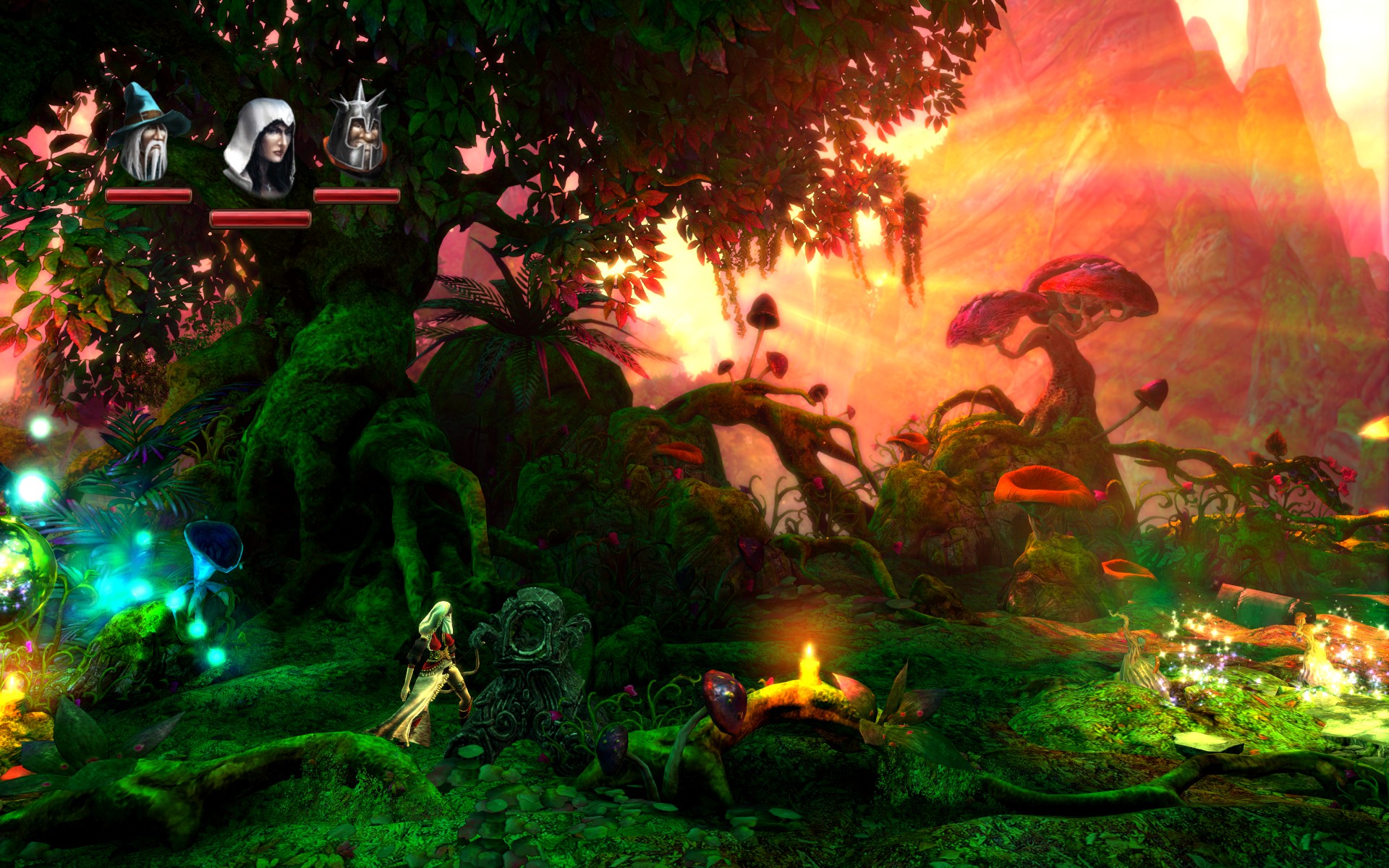 Multiplayer is supported, with both a local and online mode.  Online is new to this game, and it's done very well.  Under normal or 'Classic' multiplayer mode, each character can only be on screen at one time, so each of the up to three characters can only be used by one person at a time.  There is also a new mode, called 'Unlimited', which allows any combination of three players to play together.  For example, if you want three Zoyas, you can have them.  And local multiplayer can be joined at any time by simply pressing a button on a controller.  Finding a game to join or players for your game is not a problem since there seem to be a lot of people online playing this game.

Appropriateness issues are fairly light, and certainly in line for a game rated E10+.  There is magic in this game.  You can summon objects, and levitate items at will.  Each character has an attack that seems to be magic enhanced, like Pontius' fire sword, or Zoya's frost bow.  The female thief is reasonably covered.  She is wearing short shorts, and the garment that covers her chest is like a large red bikini top, except with a much looser fit.  But over all of this is a long dress-like garment that flows as you move, so you usually see only one leg at a time. While her curves there are noticeable, the outfit is not skin tight, and not done in an overly sexualized way.  There is violence, in the form of killing goblins, spiders, and various other enemies.  While there is a very small amount of green blood when goblins are attacked, there is no gore.  There is also one storyline plot which deals with jealousy and betrayal.

Most of the characters matured some from the previous game, and as a result most of my minor complaints are no longer here.  For example, Amadeus was a wizard who focused more on women than his studies in the first game.  Now, he's married with children.  I did get a kick out of one comment from Zoya where she pointed out Amadeus acknowledging that a queen was quite beautiful, saying 'is she more beautiful than your wife?'

Trine 2 is an excellent follow-up to the first Trine from 2009.  If you take everything that made Trine great, and refine it, Trine 2 is a logical result.  It's Trine, only better.  Of course Trine is absolutely worth playing – and if you can, I would encourage you to do so before playing this.  But if you won't play this otherwise, don't let missing the first one stop you – this is great stuff here. There are elements that aren't as explained as well as the first, like the nature of the Trine itself, and there are a few allusions to the first game in the quips some of the characters make, but this game can definitely stand on its own.  And if the very small appropriateness issues don't bother you, I can't encourage you to play this enough.  It's a fair value as well, since the Complete Story comes with the Goblin Menace expansion as well.  The PS4 and PC versions retail for $19.99 and I have seen discounts for both via PlayStation+ or Steam.  Either version is a worthy addition to your gaming library.