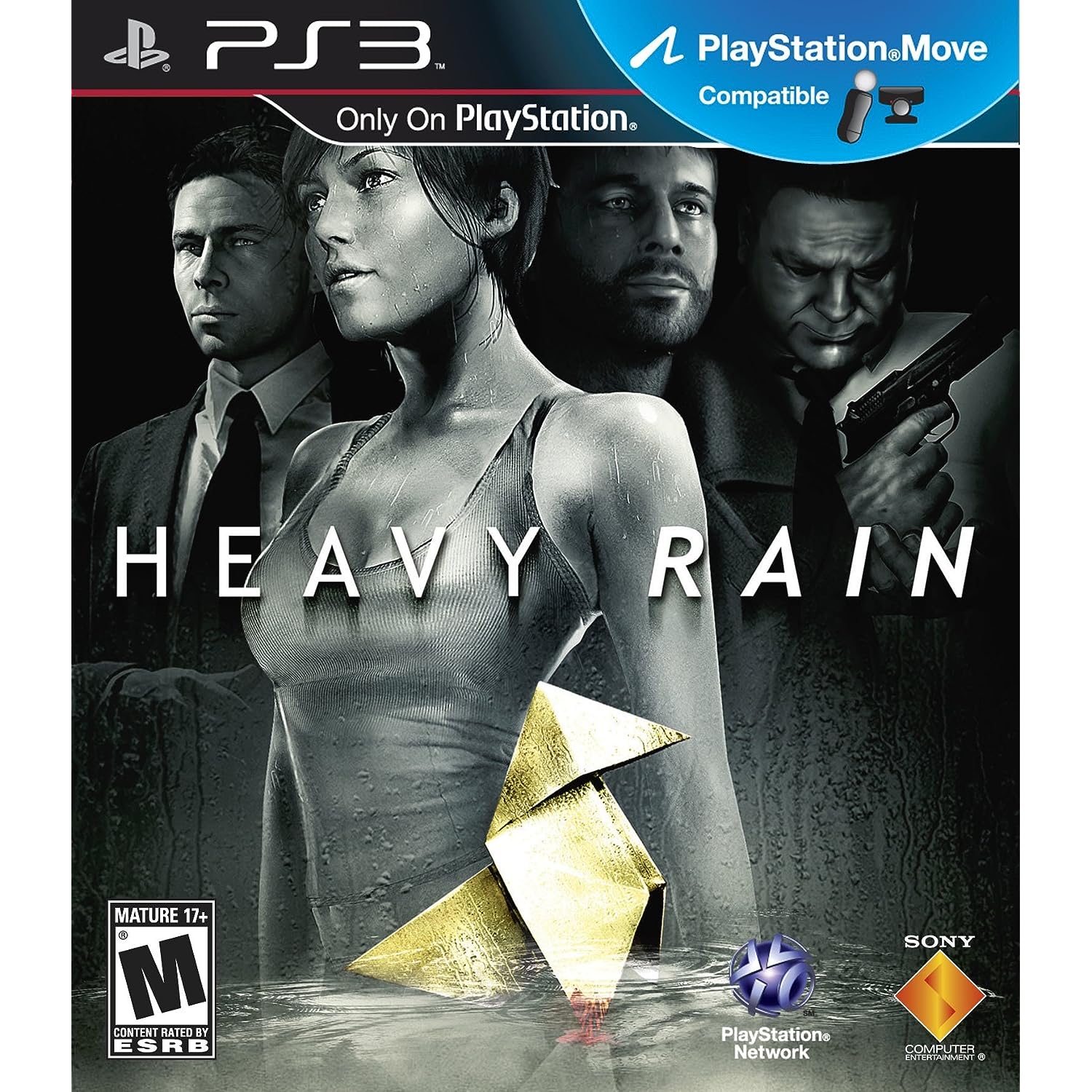 Editor’s Note: Because of the nature of Heavy Rain, an accurate explanation of any potentially offensive content in the game is impossible without serious spoilers. The reviewer has tried to avoid this, but with this game, it\'s nearly impossible. You\'ve been warned.

Let me ask you a question.  Respond quickly.  How far would you go to save someone you love?  Would you eat a Klondike bar to save your love?  You would.  Okay.  Would you crawl through a tunnel filled with razor sharp shards of glass?  Would you hurt yourself?  Would you give your life to save that person?

That initial question – “how far would you go to save someone you love?” – is the oft-repeated “theme” of Heavy Rain.  It’s featured in the game, in the marketing, and prior to the game’s release, was frequently mentioned by the game’s writer/director David Cage. Weak Points: Plot sometimes falls apart upon further analysis; third act is exciting, but not as strong as those preceding it; weak secondary voice acting; background graphics aren\'t as solid; gameplay might not be deep enough for some; game seems incredibly short

Moral Warnings: Violence is infrequent but brutal, including the option to kill or spare people; one sequence presents suicide; another presents bodily harm to oneself; sexuality is featured, including nudity, a sex scene and a sequence with the option of a striptease - these sequences are all optional; much of the plot revolves around a serial killer who abducts children, so the rest of the plot is understandably dark; drug use is featured and is a plot thread for one of the characters, though there is nothing beneficial shown in his addiction; profanity is also prevalent throughout

Cage, the director of previous titles such as Indigo Prophecy (PC, PS2, Xbox) and Omikron (PC, DC), is nothing if not ambitious.  He holds that story is one of the fundamental possibilities of game design.  His games reflect this, often at the expense of gameplay.

Not content with a traditional definition of gaming, Cage set out to create an interactive film in Heavy Rain.  The results skew far more towards the “game” side of the equation, but they are nonetheless disturbing and absolutely engrossing.

Heavy Rain is initially the story of a broken man named Ethan Mars.  He is reeling from the loss of his son, and blames himself for the tragedy.  His wife blames him as well.  As he grapples with the death, investigations are being conducted into a serial killer, dubbed the “Origami Killer.”

Through the frame of the investigations into the killer, three other faces emerge: Madison Paige, a photographer; Norman Jayden, an FBI agent assisting in the investigation at a local police precinct; and Scott Shelby, an aging ex-cop, who has been hired by the families of the victims to investigate the crime as a private investigator.  These characters, along with Ethan, comprise whom the story follows, and who the player takes control of at certain points in the game.

Initially, much of the game seems mundane.  As Ethan, the player takes him through his morning routine: a shower, a shave, getting dressed and maybe doing some work.  Soon, however, things spiral out of control.  Ethan and the rest of the cast are plunged into the seedy underbelly of the city in which they live. The situations that the main characters find themselves in will, in turn, test and try them.  Violence and danger can come out of nowhere.  Characters can and will die, changing the course of the story and its outcome.

This is generally done at a pretty relaxed pace.  However, certain sequences throw the characters into action, and the prompts come at the player faster.  If a button is missed, the character might become visibly injured, or even killed.

The game will then adapt as need be to fit the story, which would add a convincing element to the game, if it weren’t for the fact that only two of the characters can actually die during the majority of the game.  These changes in plot also reflect player choice: saying or doing one thing will often lead into another scenario.  One of the best examples of this occurs in last half of the game, when Madison goes to follow up on a lead at a retired doctor\'s home, and can end up drugged and in mortal danger if the player makes the wrong decisions. It’s pretty easy to become sucked into the world of Heavy Rain.  The plot is engrossing (despite some later-revealed plot holes) and the gameplay is compelling as only a good adventure game can be.  Adding to that are the impressive visual effects, combined with excellent character models.  The effects add to the atmosphere, with rain seeming to constantly fall onto the already soaked streets.

Likewise, characters are modeled more or less realistically, though they do tend to move a little too stiffly to be particularly believable.  Yet for the all the skill and care that went into the characters and into the effects, the environments fall far short of what one would expect.  For a game that wants the player to feel like they’re living a psychological thriller, nothing feels lived in.  This is problematic because it is jarring; it removes the player from the experience, which is unfortunate in a game so dependent upon emotion.

Also uneven is the voice acting, which ranges from pretty good (Madison and Ethan and Shelby) to decent (Jayden and a number of supporting players) to flat out awful (Ethan’s kids – in a word, ugh).  For a game set in an anonymous American city, there are a number of suspiciously foreign-sounding accents about.  With some of the lesser voice performances, these again bring you out of the experience.

The game’s score brings it around again, with moving themes seemingly inspired by the best of neo-noir cinema, with notable influences from crime films such as Seven and Chinatown.  These subtle, haunting themes run through the game, and help elevate emotion.  After all, the designers wanted this to be an interactive film; emotional resonance tied into the score help to drive that point home, even as other aspects of the game fail in that regard. As mentioned above, Heavy Rain is about the investigation into a serial killer known as “the Origami Killer.”  Violent threads run through this story as a result.  While nothing truly graphic is ever shown, the disturbing nature of your possible actions (which can involve dismemberment of Ethan’s finger and murdering a man at point blank range) show that this game is not for the faint of heart, nor for children.  That’s really only the tip of the iceberg, however; expect violent fights that – while not frequent – can result in death.

Sexual situations are also present: at one point, Madison is asked to strip for a nightclub owner at gunpoint; at another, it’s possible for two characters to have sex, though this is avoidable.  Madison and Ethan both have nude shower scenes, though Madison’s is clearly the more sexual by how the camera frames her, whereas Ethan’s scene is far more matter-of-fact, far more passing, instead of the lingering images that accompany Madison’s scene, lingering images that border on pandering.  Another character interacts – non-sexually – with a prostitute, and later finds a woman who has attempted suicide, lying unconscious in a bathtub.  How the player reacts to these - and other - situations changes the story of the game itself, which is not exactly unique, but affects the game’s emotional resonance.

Drug use is possible, though not required, for progression in the game.  It actually forms one of the more captivating story arcs, because Jayden is an addict, investigating the case.  And, as is usual with games with this type of disturbing content, profanity runs through the game.  Expect what you’d hear in an R-rated movie, though it’s important to note that the language doesn’t stray into Tarantino-territory (f-bomb every five seconds).

I’ve reviewed quite a few games over the years on this site.  Heavy Rain is, without a doubt, the most unique of these.  For all of its ambition, it is extremely flawed – even clichéd, at points – but always unique among its peers.  It is also one of the most disturbing games I’ve ever played through.  I fear that I haven’t illustrated that point clearly enough above, but then, I’m not sure how I can.  The game runs the gamut from sadness to terror and back again.  Some of the actions that you can commit in this game are literally gut-wrenching.  In all my years as a gamer, I’ve never before experienced that.  I can say that because of the way that this game hit me, I cannot hesitate recommending it, but for a caveat: its rating is absolutely important. This game is the equivalent of a hard R-rating, and should really only be touched by adults or mature teens.

That said, this is a game that may not revolutionize the industry, but not for lack of trying.  For that reason alone, it’s worth playing.