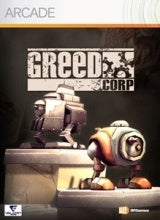 In life, greed is one of the seven deadly sins. In Greed Corp, it’s your ticket to paradise. From windmills that pound the ground for resources to airplanes that carry tiny digital characters to foreign plots of land, W!Games‘ Greed Corp is all about the Benjamins, baby.

With their only other release as W!Games being My Horse & Me, W!Games really stepped their game up with a fresh design and an interesting plot to boot. I really have to say that Greed Corp did not disappoint me in the least.

The game’s plot is reminiscent of the mentality of all the world powers back in the 15th century mixed with Bioshock’s futuristic 1950s set-up. In the 1950s-esque future, the only way to have a lot of money and power is to own more land than everyone else. In this supposed future there are four factions fighting for all this land: the militaristic Empire, the gluttonous Cartel, the smart Pirates and the peaceful Freemen. Throughout the entire game you’ll fight as or against every single one of these factions, exploring each of their backgrounds and ideologies as you go along.

Strong Points: Interesting story line; character designs are quirky and new; the gameplay and controls are really easy to graspWeak Points: Multiplayer following is practically non-existent; game doesn’t focus much on the storyMoral Warnings: There is violence, but, as you’re destroying robots and demolishing buildings, it\'s bloodless

The gameplay is best explained as a fusion of a light version of the conquering system in Civilization IV with the tactical gameplay of pretty much every turn-based strategy game. Everyone begins each match with a set number of tiles that belong to them, respectively, with the remaining tiles being neutral and up for grabs. You can snatch up tiles by moving robots to a tile that isn\'t owned by you. When you move to a tile that belongs to an enemy, the robots don\'t actually fight; an explosion insues and the amount of robots the enemy has on the designated tile is subtracted by the amount of robots you moved over. This entire set up felt really casual and the calm, innocent and relaxing visuals only reinforce my opinion.

The only problem I had with the gameplay was the fact that I had to wait for every opponent to slowly move each unit or build each building. When you’re playing a four player game against the computer, those wait times get pretty ridiculous. They could easily release an update that creates a “skip opponent’s turn” command, but the likelihood of that update coming around is slim to none.

Remember that little “more land = more money” bit I said earlier? That’s actually to be taken literally. In Greed Corp you have to place various machines on the “game board” to smash the surrounding tiles and withdraw gold. The game would be a walk in the park…if these machines didn’t break each level to pieces. Each tile can only be smashed so much until it crumbles into the abyss and takes anything that is on it with it. This is probably one of the most important concepts of the game because not only does it give you more money but it can also eliminate your enemy.

The only way to eliminate your enemy is to ensure they have no remaining tiles. This can be done one of two ways: damning all their tiles to the unknown abyss or claiming their tiles as your own. The concept is simple but the execution isn’t. For instance, you and your opponent may each have three adjacent tiles. You can fly over to his side and create one of those land destroying machines. You can then proceed to ordering the machine to self-destruct, thus destroying your opponent. To someone playing this game for the first time, this strategy won’t be immediately apparent. After a few hours of playing, this strategy becomes one of the simplest things you can do to eliminate your enemies.

There is also an online and offline multiplayer component to the game. I won’t elaborate on it as it is literally the same thing as battling the AI but maybe a little harder.

Overall, Greed Corp entertained me thoroughly. It challenged me, it made me scream when I lost and it made my appreciation for PSN games skyrocket. Winning a match in this game, offline or online, was extremely satisfying because it felt like I just passed a test of wit. The old-school 1950s soundtrack that played throughout the entire game really struck a good chord with me too. If you have a PS3 and you want to test your smarts, buy Greed Corp off the PSN and fight against three computer players on the hardest difficulty (The game has three difficulties: Beginner, Skilled and Expert). It’s quite the task and who knows, you might get a few trophies out of it. And everyone loves a well-earned trophy.