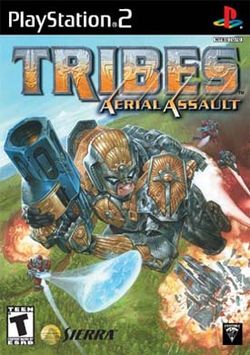 So as I’m sitting there with my friend, playing some shooter I‘d picked up a little while back, he mentioned how similar it is to Tribes. “Tribes?” I say, “What’s that?” “It’s pretty cool, almost like an arena shooter but in a much bigger environment and with jetpacks,” he replies. Making a mental note for myself, I told him that I’d have to try it out sometime. A few weeks later, I got my chance when I found a spin-off of the series, Tribes Aerial Assault, in a bargain bin and figured I’d give it a try. Who knows, maybe it’s an underrated gem of a game.

I popped the disc into my PS2 and the game’s basics became clear instantly: a twist on the old-school arena shooter with all the ups and downs that come with it. Deathmatch, Team Deathmatch, Capture the Flag, bot matches, two-player multiplayer, and plenty of maps—all the necessities are here. Similar to the previous games, each player has a jetpack that can be used to traverse the battlefield in various ways. “Skiing”, as it’s come to be known, is the most effective way to get around and can be used to quickly climb and descend hills, building momentum during the entire process.

And that's a very important thing in Tribes, because without speed, you’re very likely to be dead in a few seconds. The most popular weapon among CPU’s and humans alike is the Spinfusor, and it’s absolutely devastating to any idle players. Almost everyone has explosive weapons equipped, so you’re never more than a minute away from death. It’s 100% chaotic, insane, and fun. 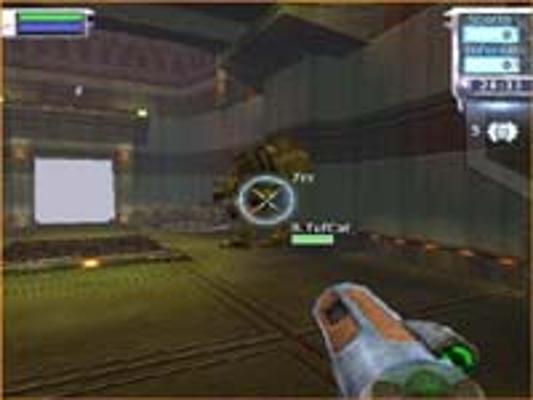 Bounding off one mountain, skiing down the next, catching a glimpse of the enemy, and firing off that one perfect shot to win the game—Tribes is immensely satisfying once you have the basics down. There’s a much greater degree of skill involved in Tribes compared to most shooters, and while it certainly takes some time to acclimate, the reward is worth it. Instances like the one I described earlier become common, and objects that were once obstacles become ski ramps and launch sites for hit-and-run attacks.

Unfortunately, getting to that point may take a while. There’s a decent set of tutorials that help players learn the basics, but it’s clear that this game was meant to be played on a PC. The analog sticks on a PS2 controller just don’t afford the same kind of accuracy that a mouse does. Not to mention many of the button layouts feel unnatural and can only be changed before the start of a match.

This isn’t an unfixable problem, as it becomes manageable once you find a control style that works for you, but it’s still a major problem considering how important control is here. Sure, after 30 minutes or so you’ll be able to hold your own, but that first 30 minutes will be filled with learning confusing controls schemes and dying. A lot of dying.

Once that phase is over, however, things become much more enjoyable. As mentioned before, there are quite a few maps and in addition to the basic Deathmatch, Team Deathmatch, and Capture the Flag modes, two other modes, Hunter and Capture and Hold, add a pinch of spice to the otherwise modest offering. Neither one is particularly unique, mind you, but there are enough maps to ensure that there’s almost always another combination to try. Factor in the two-player split-screen multiplayer, and there’s actually quite a bit of content here. Playing with a friend is an absolute blast, and the only area where this version trumps any of the PC versions. 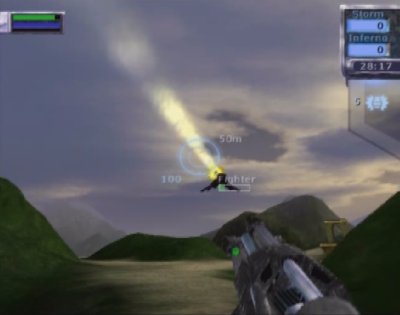 Which is really about everything the game has going for it, since I’m well aware that the PC versions are better.  I’m glad to see that Inevitable Entertainment was able to pack so much in, but it seems like everything else took a hit because of it. The audio isn’t crisp, the voices sound awful, the graphics haven’t aged well at all, and the controls aren’t precise by any means. It’s not exactly fair to slam a game for being on the wrong console, but Tribes just can’t fit itself onto the PlayStation 2.

It’s not that there’s anything horribly wrong with it, but whenever I was playing, there were tiny problems just gnawing away at me. That structure doesn’t look good, I can’t change the controls, the analogue sticks aren’t precise enough. Even a few moral issues popped up; aside from the obvious violence, I noticed a revealing female outfit.

Coming away from Tribes Aerial Assault, my feelings are mixed. As my first experience with the Tribes series, I loved it. The multitude of maps, mixed with a few different modes, and split-screen multiplayer more than justified the purchase for me. But at the same time, I realize that most people will prefer any of the PC games. If you have no other way of playing Tribes, and you have a friend to play with, this isn’t a bad option; otherwise, just stick to the PC.