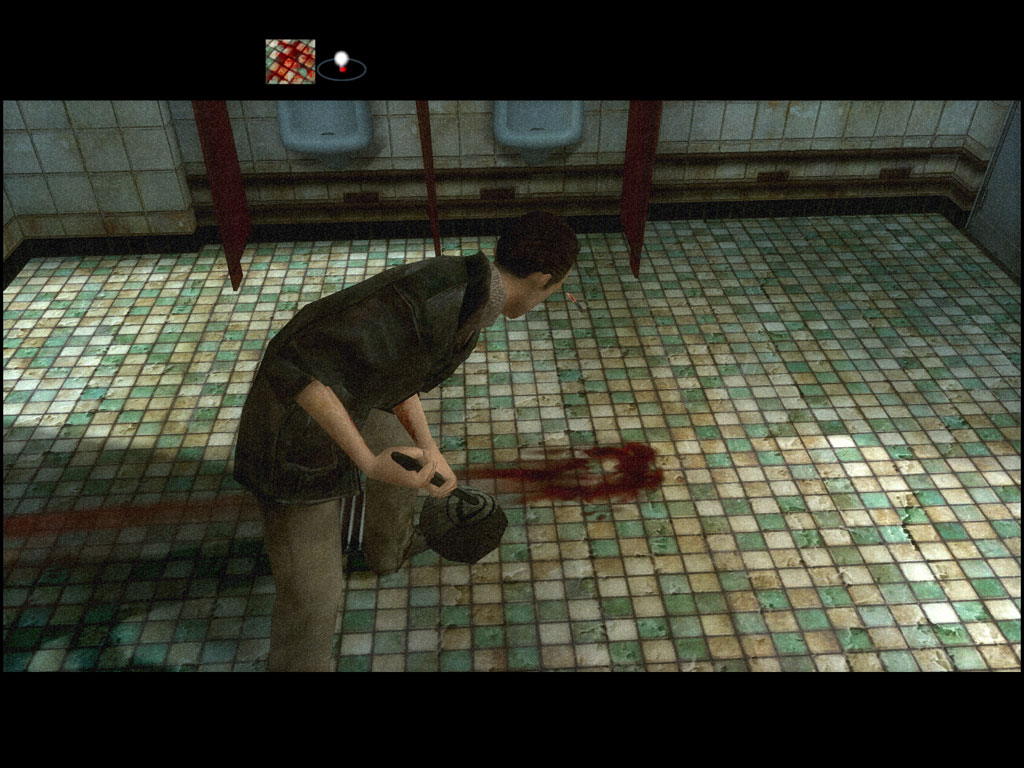 Indigo Prophecy is a reinvention of the old-school adventure genre. The focus is still squarely set on the story, and your enjoyment of the game will probably depend entirely on how much the plot grabs you, but huge amounts of interactivity are thrown into the prevalent cinemas to keep the experience from becoming passive. Some interesting ideas are brought to the table, but it is clear from the beginning that this is not a game which will reinforce your biblical values. You start out as Lucas, a man who has seemingly just been possessed and forced to brutally stab a man to death in the restroom of a diner. He regains control of himself, realizes what he’s done, and panics. This panic is reflected by the mood gauge in the corner of the screen, which you’ll have to manage throughout the game to keep your character from killing himself or being committed to an institution (the highest a character’s mood can be is “neutral”, which should be a hint that it is only going to get bleaker from here). In this case, if you mop up some of the blood on the floor or hide the body in a bathroom stall, Lucas’ mood will rise.

You’ll find that the interface for doing this is creative but annoying. Objects are manipulated by tilting the right analog stick in the direction indicated at the top of the screen. This is meant to simulate the motion that the character is doing, such as pushing forward to push on a door or pushing right to slide a drawer to the right. It’s novel, but it gets old after a while and the frustration is compounded by sluggish controls. The fact that just walking in the direction you want to can be a struggle is irritating during timed sequences and absolutely infuriating in the game’s few stealth segments. Anyway, after you’ve messed around in the bathroom, Lucas is free to go back into the diner.

You can talk with people, eat something, or just leave. I sat down, ate, and left without paying. Once the cop who happens to be eating there decides he needs to use the restroom, you know it’s time to bolt. Once Lucas is out of there, the perspective changes and you are now in control of Carla and Tyler, the cops investigating the murder scene. This makes for a unique game play experience. When I had Carla examine the table I sat at as Lucas, she’ll notice that I didn’t pay my bill. Little things like that went a long way toward making me feel like I was controlling the whole story and not just a few key players.

While the final outcome and the structure of events are by and large fixed, your choices, successes, and failures will alter the experience enough to make you feel intimately involved with how the plot unravels. What I just described is only a taste of the first 20 minutes of game play. What starts out simple escalates to something of global significance. All the while you’ll be switching perspectives and seeing all sides of this creepy and bizarre tale.

As the story ramps up, so does the action. Rather than forcing you to just sit and watch the most intense scenes like other story-driven games, the outcomes of Indigo Prophecy’s drawn out fights, chases, and other physical struggles are determined by how well you do in the button-pressing mini-games you’ll have to play while watching. These generally involve Simon-says type challenges where you’ll need to move both analog sticks matching onscreen cues or sequences in which you have to alternately tap the trigger buttons. Action game fans might be put off by the lack of direct control, but it works well if you know what to expect and the concept is often used in creative and rewarding ways that you’ll have to find out for yourself should you choose to play this game.

The drab, grainy graphics, which would have been stunning on the PS1 but are mediocre or worse by the standards of this generation, are more than made up for by atmosphere, subject matter, and cinematic direction when it comes to getting an emotional response from the player. The sound is pretty good, with great voice acting, a haunting score, but a few misplaced 70s-style funk pieces seemed completely wrong. The game crashed on me once, which wasn’t so bad because the auto save feature records progress frequently. I came to really care about the characters of Indigo Prophecy and their lives. Whether you will too is solely a matter of personal taste, but anybody who likes a good murder mystery with a supernatural twist will probably find Indigo Prophecy very interesting. On the other hand, it is often disturbing, always creepy, and sometimes downright terrifying, so weak stomachs beware. Indigo Prophecy is not for everyone.

The ESRB rated Indigo Prophecy M (Mature) for *deep breath* Blood, Partial Nudity, Sexual Themes, Strong Language, Use of Drugs and alcohol, and Violence. Needless to say, this isn’t a game for kids. Note: an AO (Adults Only) rated directors cut version exists on the PC. Only the content of the M rated release is covered in this review. The biggest problem many Christians will have with Indigo Prophecy is the occult themes. I don’t want to spoil the plot, but it needs to be made clear that the story involves unholy rituals, evil cults, psychic powers, possession and human sacrifices. I couldn’t tell how much was real and how much was made up, but the plot is associated with a real ancient religion. The villains’ powers are clearly occult in nature, and one of the playable characters has psychic and physical powers that are hard to categorize. The story has nothing to do with Satanism, but a pentagram rears its ugly, five-pointed head at one point, as do tarot cards and séance-like rituals. The bloody, ritualistic murder that opens the game (not player controlled) disturbed me deeply, and I’m not the kind of guy who is disturbed easily.

The game play itself is rarely violent at all, and there are only a few scenes in which there is actual fighting. Occasionally there is some killing in self-defense or in the defense of others, and without giving too much away I will say that these instances are gore free. What are a little bloody, however, are the crime scenes that you investigate as Carla and Tyler. The game never shows you anything just for shock value, which is commendable, but this is a murder mystery so you will be seeing dead bodies. On the positive side, magic and sorcery are clearly associated with evil in Indigo Prophecy. The language gets to be on the vulgar side at times. It’s not like there is a bad word in every sentence, but pretty much every four-letter word is used once or twice except for the F-word. Exclamations like “oh my God” and “dear God” are used very frequently. As far as sexual content goes, there are one or two brief scenes (a couple of seconds long) where characters are seen having sex on screen. Nothing below the shoulders is shown. Besides that, there is a shower scene where the scenery or the camera angle keeps you from seeing anything. Clara’s neighbor, a very minor character, is homosexual.

The world of Indigo Prophecy isn’t morally black and white. Since one of the main characters is on the run from the law, there is some rejection of authority figures required to progress. You’ll have to lie and even fight the police at times in order to be free to accomplish the greater good. On the other hand, the game occasionally throws an ethical dilemma at the player and rewards him or her for doing the right thing. Also, a few unfortunate urine jokes and racial stereotypes blemish the otherwise tasteful tone of the game.

The experience of Indigo Prophecy can’t be evaluated by summing up its graphics, sound and so on, so I’m not even going to try to break it down like that. It’s an interactive movie, and understanding that from the get-go is the key to enjoying it. Its unique game play features are interesting, but they can’t carry the game. Your enjoyment will depend entirely on how you like the story and I can say right now that many of you will not. On one hand this is a game which takes the “M” label seriously by actually being mature and not gratuitous about its themes, but at the same time the content is decidedly unbiblical, so I couldn’t possibly justify giving Indigo Prophecy a high score for this site. Game: 37/50 Violence: 1/10 Language: 6/10 Sexual Content: 1.5/10 Occult/Supernatural: 1/10 Cultural/Moral/Ethical: 5/10