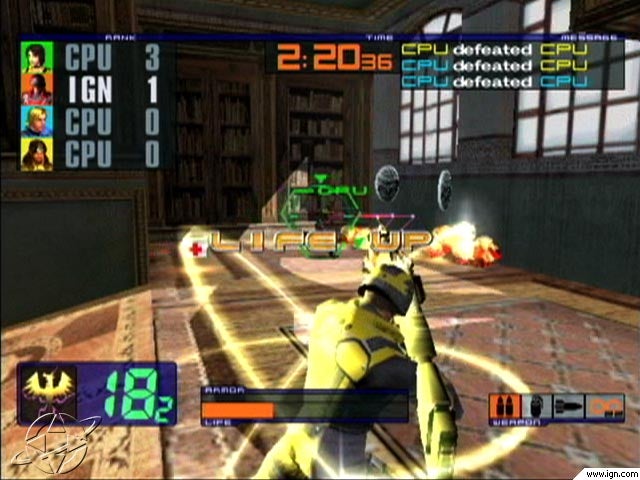 Assume the role of an elite member of the ICTS (International Counter Terrorism Special Forces) and battle with all manner of wrong doers - from bloodthirsty terrorism factions to lawless crime syndicates. With 4 different characters and a variety weapons to choose from, your mission in this first-person shooter is to wipe out those nasty enemy forces by any means necessary. (Quoted from EBgames.com)

?Deathmatch? is the name of the game. No matter what mode you?re playing, the end result is most commonly just that. Outtrigger was originally an arcade game, and as such, the gameplay was designed to be extremely fast paced, and it certainly is! The game engine is very well and tightly built, you will never be able to blame irresponsive controls for your death. To keep the game moving quick, the levels are generally quite small (though there are a couple of larger levels, they pale -in size- in contrast to Halo). This means no five-minute hunts for your opponent. Something I find quite pleasing. There is also the inclusion of ?medals?. When you kill an opponent, you gain a point, and they will drop a medal. This medal is worth another point (or occasionally two if you?re play with the handicap option on), so you?ll want to be quick and get it. This keeps players from just hiding and killing unsuspecting victims. There is actually a bit of variety in the levels, and your tactics can very greatly depending on your weapons selections. Speaking of weapon selections, unlike most FPS games, you can only carry the three weapons you start with. Fortunately, there?s a custom character mode, which you will find useful. The single player modes are quite simple, starting with your typical tutorials, and then moving up to normal Sega arcade challenges. The single player is nice, as it gives you chances to gain more weapons and characters, but the main appeal of Outtrigger is its multiplayer. Addicting is a very suitable word. With the battles being quick, the race for supremacy is most enjoyable. The only major problem I have with the gameplay is the controller and its control schemes. The Dreamcast controller is limited (by a lack of two analog sticks), and you?ll have to experiment with different control schemes to find which works best for you. ?D1? is the most common, and most familiar.

For the Dreamcast, this game is gorgeous. The characters are all well animated, and the game runs at a constant 60 fps (according to sources, but I never experienced any lack of fluidity), even with four players! Scarcely will you find a lack of graphical detail in the levels or on anything else. The special effects (explosions etc) do their job, but sometimes they seem to lack that certain spark. Whatever the case, Sega and AM2 (an internal Sega studio) know their hardware.

While the graphics certainly impress, the sound department doesn?t hold as well. The sounds are sufficient, though repetitive. The music isn?t very special at all. Though it does usually match the levels.

The main single player modes are fairly short. I doubt it would take most players more than a few hours to complete it. But I wouldn?t recommend this game for its single player mode anyway. It?s all about the multiplayer, and you will find few games of similar nature that are more fun and fast paced as Outtrigger. Rest assured, if you game with friends or siblings a lot, this game will last for a long time.

As this is a FPS, violence abounds. The game is a nonstop battle. You have a large number of weapons at your disposal, and you use them all to kill the other characters (most all of them human I should add). Some examples of the weaponry: machine guns, sniper rifles, shotguns, grenades, rocket launchers, flamethrowers and more. When you kill an opponent, they disappear near instantly. There is no blood or gore to be found.

There is no use of foul language in this game.

There are two female characters in this game. Neither is dressed very poorly. However, one of the characters wears near skin-tone leg coverings. It may seem that she is wearing a bathing suit if you do not realize that. There are also two Art Museum levels, but I don?t recall any of the art being offensive.

There is nothing pertaining to the occult in this game.

All in all, there are few first person shooters that are as clean and fun as Outtrigger. And with its low cost, I highly recommend it to anyone looking for such a game!