For any and all pen and paper RPG discussions and games.
Forum rules

Time marches on, the seasons change, Spring turns to Summer, to Fall to Winter, then back to Spring again, and I'm back to unleash another tirade about irritating player behavior because well... they keep finding new things for me to rant about.

Before I get started, I just want to say that no, I do not regard myself as the perfect DM, and I don't see myself as some sort of oppressed, longsuffering tormented soul or anything like that. These things just irritate me, and I hope to 1) Find others who can relate, 2) Help make others aware so they don't do it to their DM and 3) maybe entertain a reader or two along the way.

Let's talk about more etiquette that people need to know.

Got a friend who is intrigued by the way you describe your D&D group and is interested in joining in? Here's a thought: LET THE DM KNOW. Because I actually got this at Church a couple weeks ago:

Him: "So I was talking to personA and personB about our group, and they want to join. Would that be cool?"
me: "Well, put them in touch with me. There should be room."
Him: "Ok cool. So I can tell them to come on Friday?"

NO NO NO NO NO NO. Now, I'm not an English major, though I like to think I'm a reasonably competent English speaker. So you can understand where I'd be baffled by the idea that he sentence "Put them in touch with me" somehow translates to "Yes, tell them to come on in!" It's true that I followed that with "There should be room" but you have to understand 2 things: First, until recently our D&D group was one huge 8 player game that I was DMming. One of the players brought in a friend (To her credit, she checked with me first on that) and with the additional person, we were now able to split into 2 groups. 2 DMs at the same time with 4 players in each group. So when I said "there should be room" that's true, but there are also 2 DMs now, and it isn't my place to speak for the other. I was willing to take one player, which means the second guy would have had to go to the second group.

Your DM is trying to perform a very careful balancing act by matching the difficulty of the encounters with the power level of the group. To just bring in new people without notice or to just expect to be able to accommodate new people without letting the DM talk with them first is a massive disruption. I wanted to talk to those players first, because i don't know what their play style is. My group is focused mainly on the narrative, which means we don't powergame... But some players do, because that's just a different play style. What happens if a powergamer gets inserted into a group of casual narrative players? Yeah. Nobody has fun.

I'm serious about this. Right now, as I type this, I have a nasty blood blister in the sole of my right foot because one of the players from last night's game dropped a D4 on my basement floor and left it there... so I stepped right on it in my bare feet as I was preparing the game table for a Warhammer 40,000 game this morning. The pain was... exquisite. I dind't see it because that D4 happened to be the same color as my basement floor tiles so I had no idea it was there until it was trying to push its way into my tarsal bones. The only good part is that it was I who stepped on it, and not one of my kids or my wife.

Pick. Up. Your. Dice. If you bring a 5 lb. sack of dice to every game, and that's what's preventing you from keeping track of all your dice... LEAVE MOST OF THEM AT HOME. You do NOT need 30 dice to play D&D. You can do fine with 6. I know that to some, a big collection of dice is a status symbol, but get over it.

While we're talking about dice... That 5" diameter D20 is a cute novelty but that cuteness wears off rapidly when the migraine inducing sound of that thing banging against the table every time you swing your weapon goes into it's second hour. It was cute the first time you rolled it. Now put it away. The same goes for your heavy stainless steel dice and your novelty D20 that lights up like a restaurant pager when you roll a natural 20. We get it. We saw it. There's no need to point it out to us every time it happens.

I literally cannot think of a worse dice to step on than a d4. O_o It's basically a caltrop. Oh my gosh, I can't even. It gives me shivers to imagine it. I'm not even kinda joking. XD

Good read as always. I guess that 1D4 tweet really hit home with ya

So you don't use your metal anymore I assume 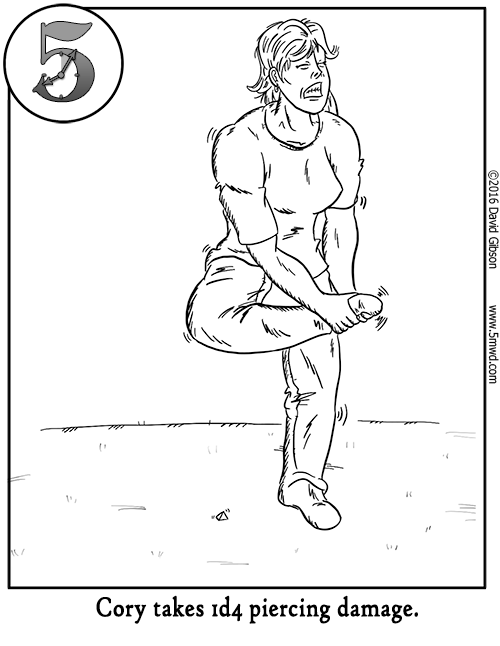 Heh yeah all the dice I use are plastic nowadays. The cool ones I reviewed have been claimed by my wife, and a stainless steel set I've had for years don't get out much.

Actually the D4 I stepped on turned out to belong to my son, who uses all plastic dice, though to be honest I don't know that it would have made a difference if those were metal...